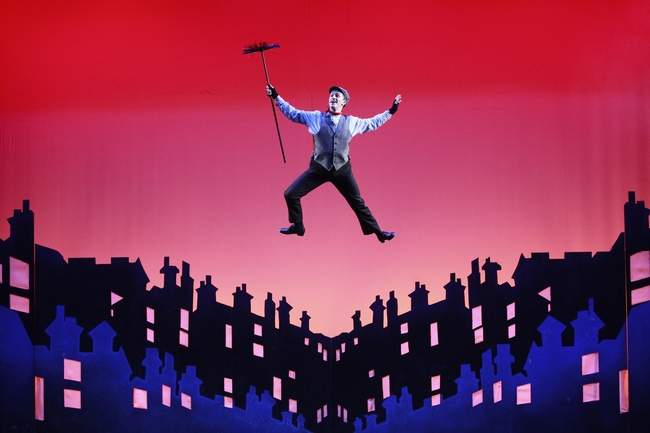 It took Walt Disney 20 years to convince “Mary Poppins” author, P.L. Travers, that Hollywood would be kind and gentle in their film treatment of her stories about the “practically perfect” English nanny. Travers resisted for so long because she wasn’t ready to part with the one-of-a-kind magic she created. Thank goodness, she finally did. The movie was made and so, too, was a musical stage version.

As such, you will never experience anything quite like New Bedford Festival Theatre’s current production of the musical, “Mary Poppins.” It’s not just for or about kids; it’s about an innocent belief in the inherent magic in everyday life, as experienced by a storybook-like cast of funny, charming, over-the-top and surprisingly normal characters, played by actors who are at the top of their game.

This is a must-see show. Don’t wait to witness the magic!

As they celebrate Festival Theatre’s 25th consecutive season, executive producer Armand Marchand and artistic director George Charbonneau are also at the apex of their creative and commercial enterprise and in sync with director/choreographer Michael Susko and musical director, Juan Rodriguez.

Casting the show’s leading roles wasn’t easy; but recognizing the talent that would fill them came naturally for Susko and Rodriguez. No one but Melissa McKamie (Maria in last season’s production of “The Sound of Music”) could do such poised, polished justice to the role of Mary Poppins. She is in charge. She commands the stage; draws us in; effortlessly flits from scene to scene, belting beautiful soprano tones and tap dancing with the strong musical ensemble. And she can fly, too. Really.

Taylor Wright as Bert, snarky chimney sweep and long time friend of Mary, makes his debut with Festival Theatre in a role that demands maturity, physical strength; humor, audience appeal, top-rate dancing and impressive singing ability. Yes, to all of the above! When Wright appeared at Festival Theatre’s Boston audition, the Susko-Rodriguez team immediately knew they couldn’t let him go. He will win your heart from his first moment on stage and will make you want to follow him wherever he leads in this delightful journey.

Bobby Sylvia plays George Banks, father of Mary’s new charges, Jane and Michael. Lauren Gemelli plays Winifred, his wife. Sylvia amazes in each new role he tackles. As the strait-laced, unemotional head of the Banks household, he is thoroughly convincing — in an enjoyable funny way — as a man who believes in and expects “precision and order”. We just know that he will eventually soften and understand that his life, his family and his happiness are worthwhile. Sylvia doesn’t disappoint in this transition, which is joyful, charming and quite humorous.

Lauren Gemelli nails her character; walking a fine line between wifely allegiance and being true to herself and her opinions. She is a bright spot in anyone’s day as loving spouse and doting mother.

Staci Morin and Ben Royer (Mrs. Brill and Robertson Ay, respectively) are golden in their household servant roles. They are perfect foils for each other and pleasantly well-balanced in song and humor. Stacey Geer as evil nanny, Miss Andrew, is outrageously hateful in the most dynamic and hilarious ways. John Costa, a local favorite, always brings a different nuance to the roles he plays. Doubling as Admiral Boom and the Bank Chairman, Costa brings attention to character detail.

Robert Goulet, Jr. as young son, Michael Banks, brings fun and believability to the role. Emmie Kelly, as his sister, Jane, leads the way. She’s got a polished singing voice, yet some of her dialogue tends to speed up and end in higher registers, causing us to lose some of what she says.

Michael Susko has imprinted his characteristic energy and creativity on this production, as he has done with so many others. His cast will tell you they’ve never had such a positive bonding experience as this one. He just engenders this kind of unity. Juan Rodriguez works his magic musically. His signature exposition and timing are superb.

Original article appeared on SouthCoastToday.com on July 27, 2015, see it here